I never gave it much thought back then, but after living in cities all over the world I now realize how special it was growing up in New York.

Within a five-minute walk from our Bronx apartment we had Italian and Jewish restaurants, and the best family-owned German Bakery you could hope for.  A short subway ride and we had most any ethnic food imaginable. Authentic too!

Angelo, the owner of  Monte D’oro – our neighborhood Italian Ristorante –  had an accent as thick as a good marinara sauce.   Mr. Stenzler, a holocaust survivor who owned the Jewish Delicatessen,  urged us in a mishmash of English and Yiddish to try the rolled cabbage saying, “If you don’t eat, both of us will starve.”  It was fun to be surrounded by that variety of  people and flavors – delicious indulgent fun. 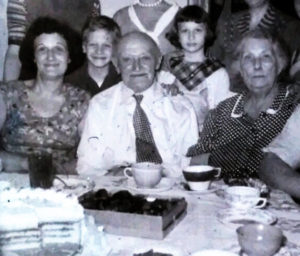 At the center of this multicultural food world was my Grandma’s Italian table around which sat aunts, uncles, cousins, grand and great grandchildren. On holidays, the big ones like Christmas and Easter,  as many as thirty or more would gather  to celebrate.  And celebration meant food.

The work of preparing these feasts fell to Aunt Tess – the BOSS – and her younger sister Vera,  my mother.  Preparation began with a  trip to Arthur Avenue, the Little Italy of the Bronx.  Shopping was done in Italian which established the sisters as “paisan” and opened the door  to  exaggerated gestures,  boisterous laughter,  and tongue-in-cheek complaints about high prices. 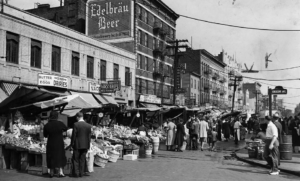 Speaking the “bella lingua”  also allowed friendly conversations that usually uncovered some family link. A relative from the same region in Italy or a cousin who went to school with the butcher’s nephew.  No matter how flimsy the connection, it was reason enough to get “a deal” on the mortadella and a wink and an extra cannoli from the baker.

On the day of the actual dinner  we would meet early in the morning at Grandma’s  kitchen where a mile-high pot of coffee was already bubbling on the stove and the bounty from Arthur  Avenue lay strewn across the huge wooden table.  The entire menu and all recipes were in Tess’ head. We had only to keep up—or stay out of the way. Kids pitched in by grating mountains of Parmesan cheese with an old, wobbly, crank handle grater ( I got my first work blisters here), shaping sticky dough for zeppole (a honey-drenched fried dough pastry), and when old enough to handle a blade,  cutting sheets of handmade pasta into broad (always uneven) fettuccine. 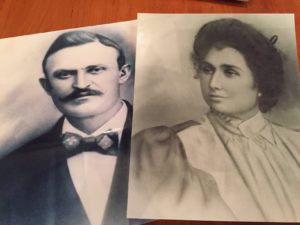 The sisters had learned to cook from Grandma who cooked for Grandpa Anthony – the son of Caserta farmers – and a hard-working man who wanted the familiar.  Bread was crusty and dense, sauce was slow-cooked,  thick, and predictable, wine was homemade, red and rich. Flavors were old friends coming to visit.

・“You need three kinds of meat and three hours of cooking time to make a good pasta sauce.” (Aunt Tess)

・ “It’s not the food on the table but those gathered around the table that make a meal great.” (?)